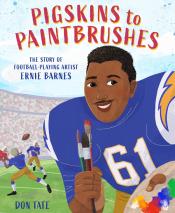 Pigskins to Paintbrushes: The Story of Football-Playing Artist Ernie Barnes

written and illustrated by 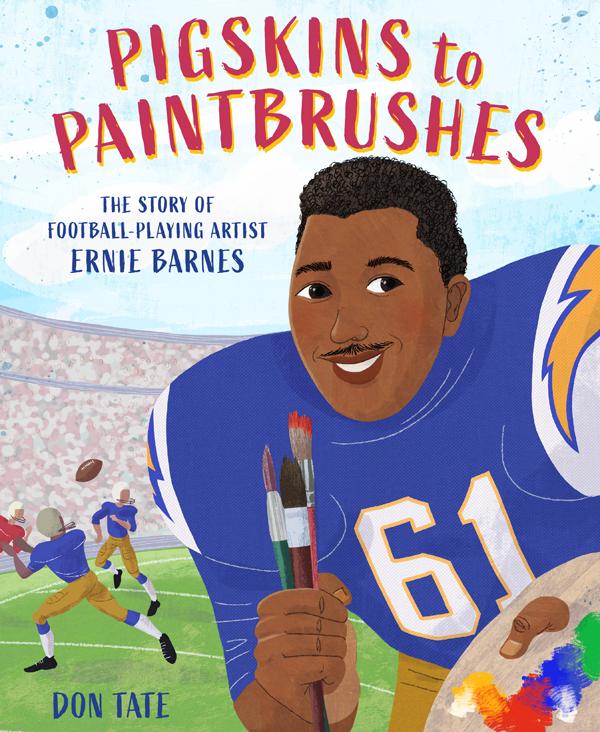 He realized how football and art were one and the same. Both required rhythm. Both required technique. Passing, pulling, breaking down the field—that was an art.

Young Ernie Barnes wasn’t like other boys his age. Bullied for being shy, overweight, and uninterested in sports like boys were “supposed” to be, he instead took refuge in his sketchbook, in vibrant colors, bold brushstrokes, and flowing lines. But growing up in a poor, Black neighborhood during the 1930s, opportunities to learn about art were rare, and art museums were off-limits because of segregation laws. Discouraged and tired of being teased, Ernie joined the school football team. Although reluctant at first, he would soon become a star.

But art remained in Ernie’s heart and followed him through high school, college, and into the NFL. Ernie saw art all around him: in the dynamic energy of the game, the precision of plays, and the nimble movement of his teammates. He poured his passion into his game and his craft, and became famous as both a professional athlete and as an artist whose paintings reflected his love of the sport and celebrated Black bodies as graceful and beautiful.

He played for the Baltimore Colts (1959–60), Titans of New York (1960), San Diego Chargers (1960–62), and the Denver Broncos (1963–64). In 1965, Barnes signed with the Saskatchewan Roughriders in Canada, but fractured his right foot, which ended his professional football career. Soon after, he met New York Jets owner Sonny Werblin, who was impressed by Barnes and his art. In 1966, Barnes had a debut solo exhibition in New York City, sponsored by Werblin at the Grand Central Art Galleries; all the paintings were sold. Barnes became so well-known as an artist that one of his paintings was featured in the opening credits of the TV show Good Times, and he was commissioned to create official posters for the Los Angeles 1984 Summer Olympics.

From award-winning author and illustrator Don Tate, Pigskins to Paintbrushes is the inspiring story of Ernie Barnes, who defined himself on his own terms and pushed the boundaries of “possible,” from the field to the canvas.Afterword, with photograph of Ernie Barnes. Author’s note. Notes. Bibliography. Full-color illustrations rendered with mixed-media collage using Clip Studio Paint and Photoshop.

For Grades 2-6
These art-themed fiction and nonfiction books will foster a love of the arts among elementary readers. Enhance your arts program monthly will 12 books per year in this category.

Other Recommended Titles From Arts Elementary Plus 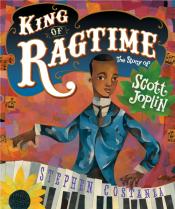 King of Ragtime: The Story of Scott Joplin

Pigskins to Paintbrushes: The Story of Football-Playing Artist Ernie Barnes 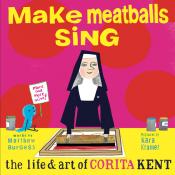 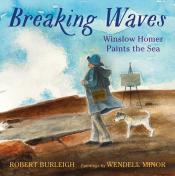